With the LYRIQ, Cadillac’s design team has created a concept that lacks for nothing in its sleek silhouette and seamless detailing. What’s more, there will be little to separate this vehicle from the production version coming in 2022 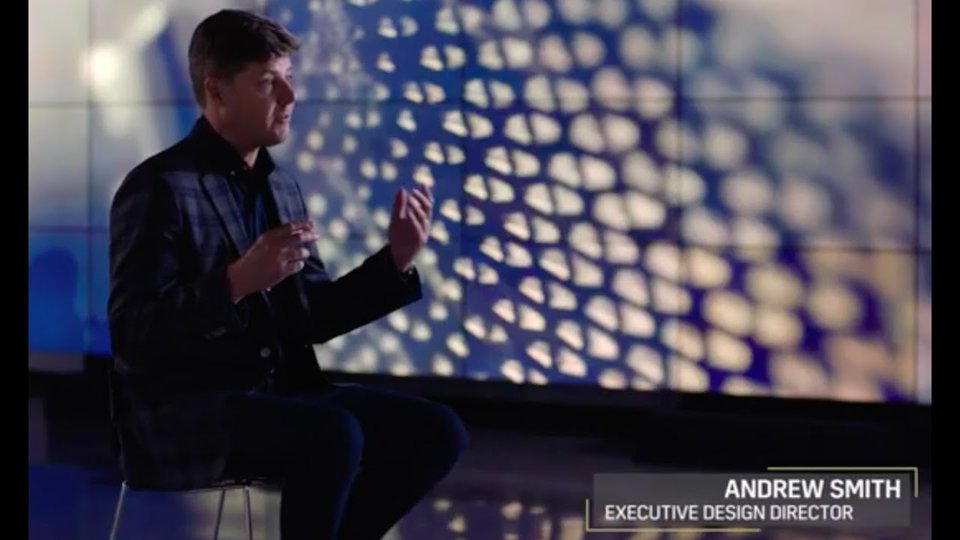 In this way the LYRIQ concept was as much a statement of intent for potential customers as it was a manifesto to the company of what more could be achieved in the production car. “It’s always hard to convince someone to spend millions, or sometimes billions of dollars, based on a 2D image,” Smith says. “It’s always better to have something three dimensional to look at.” The ability to view the concept in full size and in life-like detail helped the company decide to make several extra changes for the production model. Key changes include: the roofline was lowered;the sculpture in the body surfacing became more pronounced; and on the interior some colour and trim alterations were also made (more on that later).

“The showcar also helped us really understand how the parts go together and fit better,” says Smith. “For example, lowering the roof height a bit helped make the silhouette even sleeker. It also helped the aero team, as they have very aggressive targets for aerodynamics to enable maximum range. We also worked with engineering to minimizing sections and offsets and to put a little more sculpture into the show car’s surface that we then brought into the production car.”

Back to fundamentals, the Ultium EV platform allowed Smith greater freedom in design. “The flat floor and lack of a transmission tunnel gave us opportunities not only on the inside but also with the exterior proportions. With a fully-integrated battery we’re no longer tied to where we have to put the base of the windshield or where the front axle is relative to the occupants,” Smith says.

“It gave us the opportunity to do the proportions we always wanted,” Smith continued. “And the company stood behind us on that. With LYRIQ, we could have this real sleek and aggressive profile without compromising what a customer would expect on interior passenger space or cargo space. The width of this vehicle makes up for the relatively low roof height and short overall length. It’s one of the things we, as designers, like about battery-based platforms: the bigger the battery, the better. Those platforms tend to make our vehicles wide and our wheelbases long, which pushes our wheels to the corners so we can get a nicely-proportioned vehicle.”

Executive director for global Cadillac design, Andrew Smith says the inspiration for the LYRIQ can be traced back as far as the Escala full-size luxury sedan concept, first shown at the glamorous Pebble Beach Concours d’Elegance in August 2016. “The Escala concept was a near-term vision,” he says. “ The Escala was our way of shaking things up a little, certainly in the front and rear ends. And from there I just talked to the team and said ‘Let’s design cars that we can love ourselves’. If you think about it too much you end up designing for fictitious people who don’t really exist and do cartoon cars. I wanted the team to do something they could all embrace.”

GM does sometimes let its global design team across all brands enter competitions to draw the winning sketch for a new project, but not on this occasion. “For LYRIQ, we wanted the team to be all Cadillac, for both the production car and the concept,” said Brian Smith. He cites three designers as key to the exterior that finally became the LYRIQ: “There is a sketch of Bobin Kil’s sitting by a city with the wheels blurred. That set the tone for the general proportion and silhouette, the notion of a coupe-like SUV. Then, the team developed three long dash-to-axle [proportion] themes designed by Bobin Kil, Magalie Debellis, and Jason Chen. All three of those themes went to scale model for research. Out of that process Magalie’s themes was the clear winner. That process helped set the direction for the LYRIQ, including the all-black roof, the side-view proportion, and the dark front end.”

"Artistic integration of technology is our mantra"

The ‘darkness’ of Debellis’ front-end sketches proved functionally useful as well as aesthetically pleasing. The black grille allowed a space where to conceal the array of sensors needed to enable the LYRIQ’s active safety and hands-free driving technologies. Dubbed ‘Super Cruise’ the semi-autonomous tech will allow hands-free driver assistance and self-changing lane capability available on 200,000 miles of compatible US highways. “The black crystal grille shields you see in Magalie’s early sketches were a direct response to the need to package radar in the front and rear, provid-ing a place for radar-transparent material,” Smith continues. “Radar can see through polycarbonate, so we knew we could do some decoration on its underside as long as it stayed a constant material thickness and EVs don’t need as much airflow as internal combustion-engined vehicles, so it gave us this opportunity. These requirements helped drive how we created the front end and also made a unique face for electric Cadillacs.”

Consequently, the smooth ‘closed-mouth’ front of the car has a dramatically different look to existing ‘open-mouthed’ Cadillacs powered by internal combustion engines. With that change, Smith felt the need to differentiate in other ways to avoid the LYRIQ looking plain. “When you don’t have a conventional grille in some ways you can struggle to find a graphic,” he says. “If it all becomes body-coloured I feel the face becomes less of a ‘face’. You start to lose personality and character. But the front of the LYRIQ is becoming the guiding light for the future of Cadillac EVs.” And ‘light’ is the operative word, being used to help differentiate the exterior of the car in all sorts of ways, not just on the LYRIQ’s new face, but also in how the customer interacts with the car, with a carefully choreographed light sequence to create surprise and delight every time it’s approached. 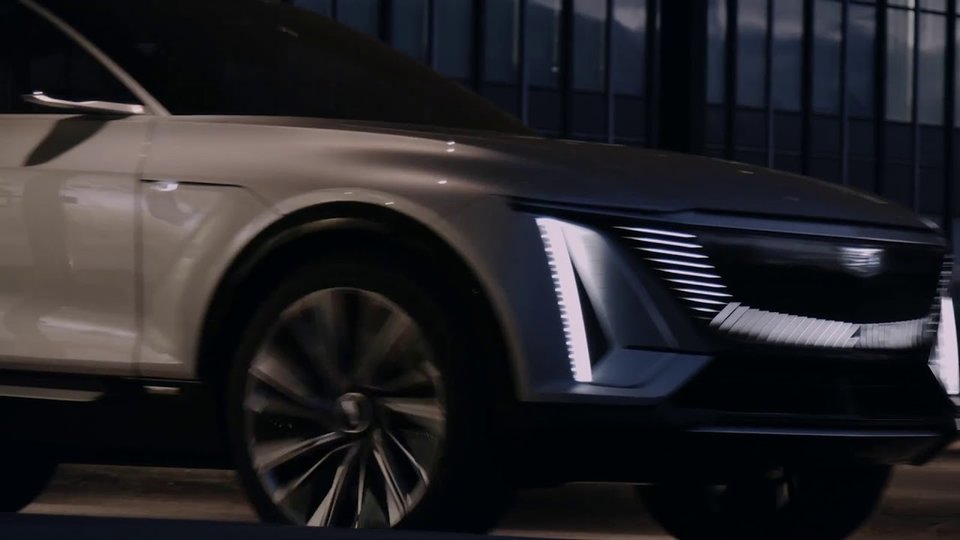 The front Cadillac crest itself is three-dimensional, back-lit and edged with bright chrome, although embedded and somewhat recessed into the black polycarbonate area. Surrounding the crest are a series of what look like artist’s hatching marks, the ones nearest the badge situated behind the surface to keep it smooth and light-coloured but unlit, while a lit outer section creates further visual contrast to the dark ‘mask’ area and a feeling of depth. It’s clearly something Smith’s exterior team spent a lot of time developing. “We played with a lot of textures and elements,” he says. “Cadillac has this history of ‘egg-crate’ grilles, that eventually evolved into very abstract egg-crate patterns. We adapted that with a new approach for a very precise and delicate pattern that didn’t overwhelm the front end and gave us an opportunity to use lighting in a new way. We didn’t feel the texture needed to live on the surface, as we felt that made it too ‘grille-like’. We looked at the pinstripes going two ways as well. At one point they were angled downwards, but we felt that led the eye to the floor, rather than the lines that now point up to the badge, to elevate it.”

The head and tail lamps are also incredibly intricate. “This is the first time we’ve really executed slim, forward lighting in a vertical orientation,” Smith says with excitement. “So the lit elements inboard of the signature lamps are our low and high beam lights and the turn signals are hidden in the upper slot in a horizontal feature.” This forward lighting on the concept will be as slim and vertical on the production car too. “It was no small feat to technically achieve,” Smith says. The tail-lamp design signature, in Smith’s eyes, is just as important. “You could almost say that the whole exterior theme hangs on the tail lamp execution and the front end. The upper rear lamp becomes a very sculptural element, as a way to manage visual mass in a refreshing way. It breaks up that fastback profile, into something that feels a little more upright and helps to shorten the visual length of the up-per.”

The technology inside the lamp cans is also impressive and far from obvious at first glance. “There is a very fine texture under the inner bezel, in a piece of aluminum that is black-coated and laser-etched with varying thicknesses of line work in a pattern that resembles the art of Mondrian. It’s a ‘tertiary read’. You won’t notice it when the lamps are on, and you wouldn’t notice it on your first walk-up to the vehicle.”

The designers have also had fun subtly referencing the new car’s method of propulsion in some of the lines on the alloy wheels and within the darker recesses of the lower body side too, as Smith adds: “There’s a fine texture in the cove within the rocker panel which is ribbed like a heat sink, just like the wheels’ black inserts. Both speak to the electrification of the vehicle.”

Very little will change on the exterior of the LYRIQ concept for production. The flush door handles will stay (and be lit), as will the smooth black front and rear masks. Exterior design director Brian Smith even says the spirit of the highly complex electric charging port opening and closing mechanism will remain. “We will have a charging port door that is not anything like a regular fuel filler flap, that was a goal for us,” he says. “We can’t divulge exactly how we’re going to do it on the production model just yet, but a lot of the flavour of what you see now on the concept will carry through. The fact that we’re using the Cadillac crest as a touchpoint to open the port is something we really felt strongly about. We use the crest on the lift gate as well, as a mechanism to open it, just like on our 2021 Escalade. Artistic integration of technology is our mantra.”