With the Lyriq, Cadillac’s design team has completely rethought the interior architecture of the car to create a groundbreaking new foundation

The key message about the forthcoming production Cadillac LYRIQ’s interior is that it will stay, like the exterior, very close to the concept. Great news, but perhaps unusual. Across the industry, in recent history at least, concept car interiors have often been more forward-looking than their exteriors; an area where more experimentation has taken place. But in the case of the LYRIQ, the opportunity for its designers to start from scratch with a new platform and few carry-over elements from existing cars, has enabled them to apply new thinking in both the LYRIQ concept and the production car that will follow. 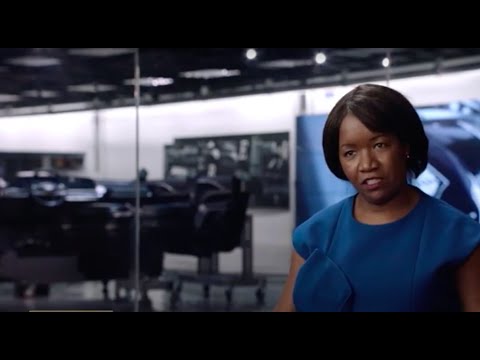 Crystal Windham, director of Interior Design at Cadillac explains: “Designers like to have a ‘clean sheet of paper’ and a battery-electric vehicle really gives us that opportunity to carve out space differently, to set a new foundation.” In her view, there are three key elements to the LYRIQ’s cabin: proportions, a clean and simple design and a good balance between hard and soft controls.

Expanding on her first point, she reiterates the importance of proportions, well-known and endlessly discussed regarding exterior car design, but sometimes slightly overlooked in relation to interior car design. “Proportions matter on the interior, too,” she says. “They allow us to get the environment prepared for all that new technology and provide the space for the precision our luxury customers expect. The LYRIQ’s interior proportions allow for this lean instrument panel that can be stretched out to the doors. That really helped with the dynamic appearance of the interior and its spaciousness. Our large curved screen takes up a big footprint within the IP. But the ‘lean down and away’ design of the IP really helps celebrate that technology, and the screen itself appears to be floating.”

"Designers like to have a ‘clean sheet of paper’ and a battery-electric vehicle really gives us that opportunity to carve out space differently, to set a new foundation"

Secondly, after the structural positioning is decided, Windham cites the importance of “clean and simple design,” which is much easier to say than to implement and can become too generic or veer off into blandness if not handled carefully. “It takes a lot of discipline to do this and it cannot be boring,” says Windham. “It’s really about allowing the designers to clean out the foundations, strike the right line and for surfaces to be uninterrupted, expressive and dynamic. This strong linear approach finds its way in how we set out the vents too, making them as thin as possible. Then we can make room for the detailing, the right colours, textures and materials.”

Thirdly, Windham highlights getting the right balance between hard and soft controls, between ones that are simply touched to make them work and others that need twisting, pressing and switching. “We want to maintain an engaging experience, everything we do in the layout is driver-centric,” Windham continues. “Everything is at your fingertips – the steering wheel, the multi-function controller and the large curved display – and to make it even more inviting we then add this jewel-like knurling pattern to the metal controls. That gives a more tactile feel for the customer.”

Her point about taking a ‘driver-centric’ approach is interesting as the LYRIQ is an SUV, not a sportscar, where a cosseted cabin with controls wrapped around the driver might be more expected. Again, she’s points out the importance of getting the balance right. “It’s driver-centric but keeping the passenger in mind,” she qualifies. “The curvature of the screen is not so dramatic that the passenger does not have a view of, and access to, the screen. On some vehicles it’s more dramatic, but with Cadillac it’s more subtle, still purposeful and intentional but we don’t want to alienate the passenger.”

The design process for the interior started at a similar time to the exterior back in late 2017 and early 2018 and one of the key factors in the winning designs for the cabin related to the functional options opened up by a change in position for the gearshifter. “The new EV architecture allowed us to get the electric column shifter off the centre console and free up more space in the centre of the IP and all the way down to the floor,” says Windham. “That change then allowed us to create this striking cantilevered console that comes from the between the front seats and pushes forward just enough to house the cupholders, the multi-function controller, a phone and an armrest.”

"It’s really about allowing the designers to clean out the foundations, strike the right line and for surfaces to be uninterrupted, expressive and dynamic"

As this cantilevered console doesn’t stretch all the way to the IP, the space in front of it can be given over to customer storage. It’s a change well-illustrated in the 2019 render by Harish Kumar, a drawing which also shows how the separate rear armrest manages to pull off a similar trick. Windham likes the design element a lot: “For me that was super-exciting, because for many years during my career I’ve been asked, ‘Where can I put my purse?’ Now we’ve freed up that space, not only for handbags but for other large items as well. And we didn’t stop there. Within that space we have a drawer and a tip-out bin. We still have the typical glove box on the passenger side but now we have additional storage for the driver. And when you open them up they’re lined and feature a splash of colour.”

This “splash of colour” is a surprise and delight element that every designer involved in the LYRIQ project – whether interior-focused or not – can’t help mentioning and will be covered in more detail in the colour and trim section. Hidden design flourishes such as these are more commonplace in other industries like fashion, where, for instance, a Paul Smith suit jacket might sport a bright pocket lining, but Windham believes her design team derived more influences for the LYRIQ’s interior from Cadillac’s near 120 years of history than from non-automotive products. “Cadillac has this rich history and we lean into it,” she says. “On the LYRIQ we really wanted to reference our past, have fun with it and make a powerful statement at the same time.”

Accordingly, there are references to the brand dotted around the cabin, often in less obvious places and ways. For example, when customers fully open the passenger-side door of the LYRIQ, they will discover the Cadillac crest and three separate ‘merlette’ birds beautifully debossed into the end of the instrument panel. Why? Because older versions of the Cadillac crest – which belonged to the 17th century Frenchman Antoine de la Mothe, sieur de Cadillac who founded the city of Detroit and who the brand is named after – feature these birds.

Elsewhere, the marque’s founding year of 1902 is also referenced. Beyond these historical brand nods to the past there are also design references too. “Other l¬¬uxury brands embrace this kind of approach, but we do it in a Cadillac way,” says Windham. “The grab handles in the show car, the exterior door paddle design and the door sill to exit the vehicle, were all inspired by some of our vehicles from the 1950s and ’60s.”

Even the triangular knurling pattern seen on multiple metal elements from the central controller to the panel behind the large curved screen refers to the brand’s crest too, albeit in a more abstract way. This pattern is also on the LYRIQ concept’s stereo speaker panel, the holes in the speaker grilles being the negative flip of the ‘positive’ knurling seen elsewhere.

Talking of ‘tuning’, the ambience created by sound – or indeed the lack of it – is also an area of the LYRIQ’s interior set to bring new experiential benefits. For the first time on one of its production cars, Cadillac will introduce a new kind of road noise cancellation technology, involving many more microphones and accelerometers. With this new system, Cadillac’s performance and audio engineers can target the frequency range of tire cavity noise, reducing the noise level in the vehicle and allowing for a quieter in-cabin experience. This is an important factor in any luxury car but perhaps even more so an electric vehicle that has no engine noise to mask road noise.

At the same time a 19-speaker system developed in conjunction with sound specialists AKG promises, according to Cadillac lead audio design release engineer Hussein Khalil, “an experience that will transport the driver from a vehicle into a recording studio.”

"This team was so cohesive, between colour and trim, interior and components...designing Cadillac is a total experience, so it takes all of us coming together"

Interior lighting is another factor that can engender feelings of cabin calmness and it’s an area the Cadillac team has worked really hard at. “Quality ambient lighting signifies the precision we’re after,” Windham says, “and it’s adjustable by intensity. We use RGB lighting so our approach is to give a recommendation to our customers coordinated with our overall colour and trim schemes but also give them the freedom to pick the colour of their choice dependent on their mood. One of my favourite areas is the splash of colour in the storage areas. Another is the back-lit decor, the layering opportunity combined with lighting. The front and rear doors of the LYRIQ show car are a great example of how we can celebrate our commitment to precision with the layering of wood, metal and lighting. It’s something we’re really excited about and that we did together as a team, in harmony.”

That last part seems really important to Windham. As car interiors become more complex and their quality more of a purchasing deal-breaker for luxury customers, the ability of her fellow creative colleagues with different areas of expertise to work effectively towards a common goal was crucial to the concept’s clear success as an overall design. “This team was so cohesive, between colour and trim, interior and components,” she says with pride. “We’re close-knit, even in proximity. Designing Cadillac is a total experience, so it really takes all of us coming together.”