Lunar and space travel are key themes in the Hummer’s customer interface, but the UX, super clean IP and a variety of options, is anything but otherworldly

With large, tablet-like screens dominating the interior, the user interface team knew the GUI would be one of the most crucial elements of the vehicle’s design. “The first thing people are going to notice inside the interior of the GMC HUMMER EV are these large, floating displays,” says Scott T. Martin, creative director for the UX team. “Our interface on these displays are very robust and you can custom-tailor them to your desires. We have multiple layouts that you can choose from on the instrument cluster, as well as zones inside that you can change.” 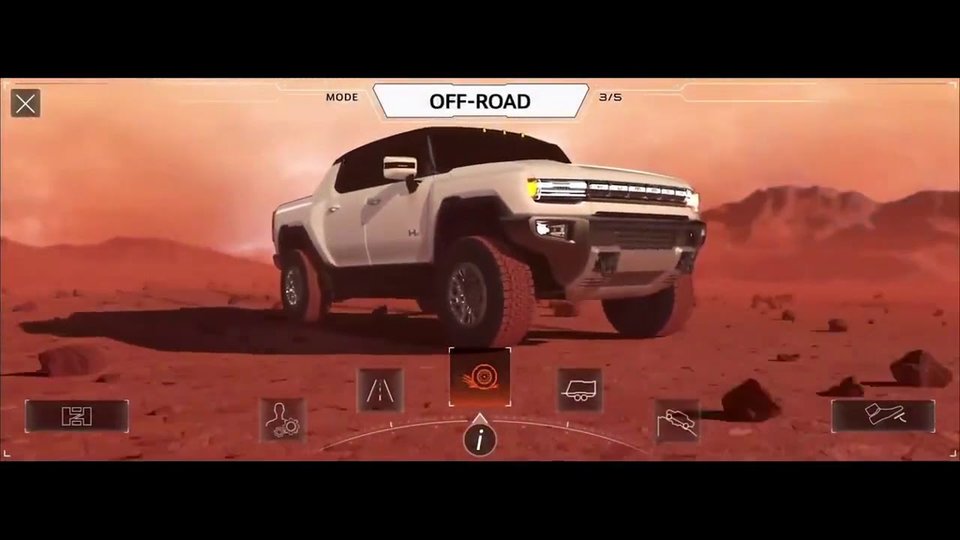 The interface also had to showcase the vehicle’s lunar and space theme in a compelling way. When the UI/UX team saw the first interior sketch of the new vehicle, Martin says “it was unlike anything we had ever seen from General Motors, to be frank. This fresh new take didn’t even feel like an automotive product, it almost felt like something that belonged in space or a lunar rover. Especially with the beautifully clean IP and the very stark white colour.” As with the interior and exterior teams, Martin’s group looked through images of the moon and space, and their “a-ha” moment came when they saw a photo of the inside of a NASA facility. “We were very struck by the clean, white interior married with this very mechanical and high-tech, precise development going on.”

They started with a sketch blitz, exploring some pre-conceived notions as well as some new ideas. “We had to think about this in the context of space, and that set the trajectory for us to dive in and look at these graphics from a lunar aesthetic,” Martin says.

"We had to think about this in the context of space, and that set the trajectory for us to dive in and look at these graphics from a lunar aesthetic"

Three brand pillars were created for the project with help from the branding team: Ultimate Responder, Lunar Red Cross, and Off-road Aerospace. “These became our guiding principles, it really resonated and harmonized with the lunar theme.”

Martin says the images the team used for inspiration very precise technical graphics, “bordering on science fiction, with a holographic aesthetic, but paired with very organic, moon-like landscape and topography to ground it and give it balance.” (To punctuate those visuals, some of the internal renderings done by the team show the HUMMER EV alongside Star Wars storm troopers and the Mandalorian.)

It resulted in a unique aesthetic called “Lunar DNA,” which employs rich, dimensional topographies and animation. Martin describes it as “a delicate blend of sophistication and attitude.” Even the custom typeface telegraphs a lunar theme, with numbers that were designed to look at home on an astronaut’s heads-up display. Graphics are powered by the Epic Games Unreal engine, which Martin says is a first for an automotive infotainment system. Originally created for video games, the real-time 3D platform is now used by multiple industries, including Hollywood film studios, to create graphics and special effects. Powering the interface in the HUMMER EV is a multi-core Intel CPU running Google’s embedded Android Automotive OS.

The first thing the customer will see is a welcome animation that takes over both of the screens. “The HUMMER EV logo itself is very simply drawn on, so it looks like it’s going to be really simple.” Martin says. “Then all of a sudden – boom – the moon rotates, the sun crests over the horizon and you see this big awesome dramatic landscape with the Hummer driving across the terrain. So right from the get-go, we’re setting the tone for a visual experience unlike anything you’ve ever seen before.” 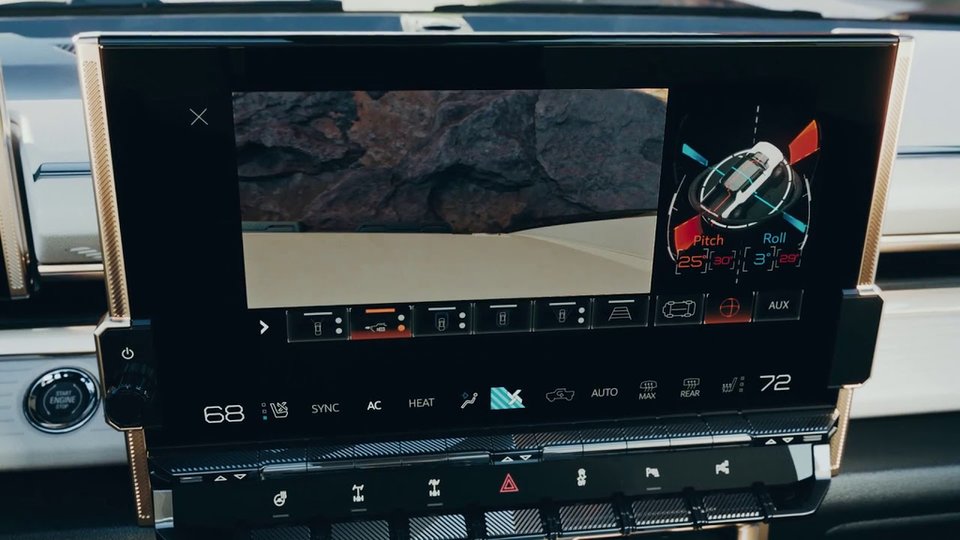 Martin says personalisation is important to the Hummer customer, so the instrument cluster offers five layouts to choose from: Lunar, Sport, Clean, Off Road, and Digital. The team created different a topography for each. In the Lunar layout, Martin points out precise, technical graphics and elements that look like they’re floating in the background. A rendering of the vehicle sits on the surface of the moon and casts a shadow. In the center area where the digital speedo is, Martin explains that the “76” graphic is not just a simple drop shadow, but a three-dimensional extruded surface. The team also created unique animations for each drive mode, and Martin says he’s especially proud of the “Watts to Freedom” function. “We show on the instrument cluster what’s happening to the vehicle. It’s lowering to its optimum height to reduce drag, the power gauge is increasing to show you that you’re turning the dial to 11, the GUI displays an exciting sequence to launch the car, and you’re going 0-60 in three seconds.”

"From the get-go, we’re setting the tone for a visual experience unlike anything you’ve ever seen before"

When the vehicle is parked and charging, the amount of charge is shown on the display in large font so the customer can easily see it from outside. Tracer light graphics indicating the level of charge echo those on the headlights. The team also created a series of EV-related screens, as well as functionality for owners to schedule charging ahead of time.

The 13.4-inch centre display gave Martin and his team a large canvas to display two functions at the same time, such as audio and navigation. The screen can also display Apple Car Play and Android Auto functions without locking out the vehicle’s native interface, which should remedy a pet peeve of those customers who want to easily toggle between systems. Off-roading enthusiasts can configure the screen with three of a slew of customizable widgets that include a gyroscope, torque vectoring, ride height, altitude, suspension travel, and steering angle. Martin is also proud of the HUMMER EV’s virtual auxiliary switches, which can be assigned different functions and icons. “Instead of having a row of blank switches that you don’t really know what they are, we allow you to plug that content in and completely customize it,” Martin says. Designers even managed to sneak in some humour as well, with icon choices including an ejector seat and a chupacabra, a mythical blood-sucking creature that has become a kind of cult-like figure in the off-roading community.

Another notable element of the interface is how the graphics adjust according to the time of day. “We thought about the moon phases and how the lunar topography changes with lighting throughout the day and that led us to develop two looks,” Martin tells us. “So you have really dramatic, moody graphics at night, and during the day you have very white, clean graphics that are the best for contrast and usability.” The interface evolves gradually so it won’t appear jarring to drivers.

Other features instruct users and enhance usability. An “I” icon at the bottom of the drive mode screen offers an explanation of what each setting does and when it should be used. The trailing application walks the customer through how to hook up the trailer, complete with an image of the Hummer towing an Apollo 15 lunar rover.  Taken together, Martin says it’s all these little details designers incorporated throughout the interface – and the entire vehicle – that bring the HUMMER EV to life and make it feel unique. “It doesn’t really hit you over the head, but over a third read, a third month, a second year, these details are going to start to ring true and are something the customers are going to discover over time.”