Smart controllers and sleek screens characterise Yanfeng’s latest interior showcase. These technologies may look futuristic, but they are ready to be adopted by an OEM and used in a new production car

Interior concept demonstrators have typically been a way for companies to explore ultramodern technologies, and while they can provide an interesting glimpse into the long-term, they tend to be void of production-ready ideas. The latest interior concept from Yanfeng, however, is very close to being fully-realised.
“The starting point for the XiM21 was a little bit different to what we’ve done in the past,” Tim Shih, vice president of design and user experience at Yanfeng, tells Interior Motives. “We have previously looked at broad megatrends and how they impact on society before narrowing down our thoughts and ideas into a concept. But this time we had some specific technologies ready for production that we wanted to showcase, so instead it became a near-term demonstrator that combines the physical and digital in order to create an enhanced user experience.”

Some of these production-ready technologies were present in the XiM20 demonstrator that Yanfeng showcased back in January 2019, which was a fully autonomous rideshare interior concept that didn’t include a steering wheel. The smart interior surface (SIS), for example, was embedded inside a wooden table at the front of the XiM20, with the haptic controls hidden until needed. Smart surfaces were also used on the armrests of the new XiM21 concept to control the seating positions, and again hidden when not needed.

But a quick glance indicates that the XiM21 is completely different to the company’s previous interior concepts, and is clearly more in-line with the design of cars currently on the market today. Firstly, the concept has an exterior, which is a first for Yanfeng. The supplier has a recently established joint venture with China-based Plastic Omnium to create lightweight exterior panels, although instead of designing an entirely new car, the team used an existing vehicle and modified it for the XiM21, including features like transparent paint and a unique lighting signature.

The idea behind putting the demonstrator inside a functioning vehicle was to indicate that the technologies are ready for production. This has had an impact on many of the design choices, such as the seating arrangement. Instead of using benches and a lounge-style layout as in the previous concept, the seats in the XiM21 are all facing forward. “The new frontier for interiors is this lounge-like set up with flexible seats that can revolve and move around the cabin, especially thinking about the rise of autonomous vehicles,” Shih explains. “But because the XiM21 is a production-ready demonstrator we pulled that back and made sure the seats are safe.” In the second row, a ‘zero-gravity seat’ does allow a passenger to fall into a deep recline at the push of a smart surface button, with the back seat automatically folding to make room. And in the other seat on the second row, a family-friendly feature is hidden.

“The child seat is built into the seat behind the driver,” Shih says. “It deploys when needed, or it can be stowed away to become a footrest for a third-row passenger. This is an evolution of a product that has been in development in China for a while. It is a strong selling point for families, so we wanted to bring that into the concept, but improve on it.”
The child seat can be controlled by an app linked to the XiM21, allowing parents to fold it away and bring it out using smartphones, removing the need to do anything manually if they have their hands full. It can also be moved forward to make it easier for people to climb into the back seats.
Between the seats, a floor console, which Yanfeng calls a “smart companion”, can slide between the front and rear of the cabin by using voice command or a button. It has heated and cooled cupholders, a wireless charging station and a deployable foot table.
Sitting up front, the driver and passenger are faced with a similar set up to cars that are already on the market. A 12.3-inch curved screen is positioned behind the steering wheel for the driver, providing information and controls for the cabin environment. There is also a 10.1-inch display that can slide across the dash.

“We deliberately didn’t go with a pillar-to-pillar screen solution, which we’ve seen in show cars and potential production cars,” Shih explains. “This could be great for the front passenger, as they would have a screen in front of them too. But if you don’t have a front passenger you are wasting that real estate, and we don’t think you need that much screen space.” Instead, the sliding display can be moved to the ideal position for a front passenger if there is one, or it can be placed near the driver to provide extra information if necessary. This re-positioning is done by pressing a button on the screen itself.

The front passenger can use the flat screen separately and can share information with the driver that will display on the curved screen, such as a destination. This eliminates the need for the driver to look across the cabin at the smaller screen, thereby keeping distractions to a minimum. 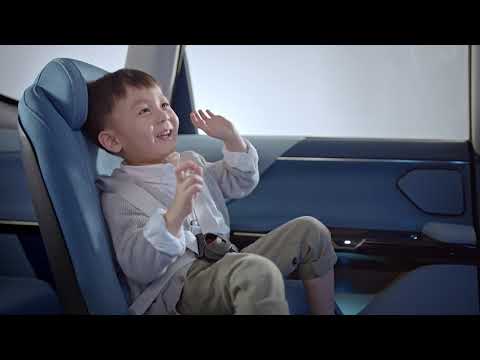 From a design standpoint, Shih suggests that curved screens make sense in terms of integration in vehicle interiors: “You rarely have perfectly straight lines in a car, so it’s nice to have that sweep. In basic terms, the lens is curved and then the screens are bonded to it to make the shape. There is a limit to how tight you make the radius of the curve, but what we are showing is fully ready for production vehicles. Also, from an ergonomic standpoint, when the screen is curved it naturally becomes closer to the driver.” New cars on the market today are full of large touchscreens. This trend has been on-going for years, and one that shows no sign of slowing. “With our previous demonstrator, the XiM20, we deliberately didn’t have any screens,” Shih recalls. “That’s because we can see in the future, with the clever use of materials and surfaces, information will be hidden so the interior environment is clean and simple, without clutter. But in the near-term, over the next five to eight years, displays will continue to be very prominent inside the car, so we wanted to demonstrate our capabilities in that space.”

At the heart of the XiM21 is the smart cabin controller. This, explains Shih, is simply a collection of chips that obtain information from all the cameras, sensors, touch displays and smart surfaces. That information is then stored as user preferences, and upon using a facial recognition system, the smart cabin can automatically adjust factors such as climate, scent, audio and lighting to provide a tailored experience.
“The idea of using smart cabin controllers has been floating about the industry for a while, but it was new for Yanfeng,” Shih says. “People are used to personalisation and customisation within electronics, and now this is coming into the car. We wanted to play with that, and we found that the best way to do it was to develop our own smart cabin controller so that we understand the entire ecosystem. We climbed a very steep learning curve in terms of software programming to create it ourselves.”
Despite the challenge that his team faced, Shih also suggests that Yanfeng was well-positioned to create a smart cabin controller due to its extensive experience in other areas of interior design. The supplier has provided seating solutions, instrument panels and cockpits to its customers for years, and has the capability of working with a variety of materials, from leather to plastics.

“We can now add a digital layer to these materials with haptic switches and lights that can be hidden when not in use,” he says. “By bringing in the smart cabin controller, the inputs from these switches are gathered to improve the experience. So, with the XiM21, we’ve essentially built on our existing capabilities of working with physical surfaces and added a layer of digital intelligence.”

In the design world, this link between the physical and the digital provides opportunity for companies to enhance their interiors, making them better suited for passengers while also becoming a brand differentiator. Shih refers to the design of the smartphone to explain.

“Physically, it looks pretty identical to any other smartphone on the market,” he says. “It’s the digital aspect that is so important. Of course, the phone has to look sleek and work perfectly, but the important factor is that there is so much information inside about your personality and the things you like which is used to create an experience specifically catered to you. Similarly, the car will always have a physical draw and an emotional impact, and it must look great and function perfectly. But the digital part is so interesting. The industry is still figuring out how to use this, and that is what we are learning about in the XiM21.”