General Motors has brought its most premium SUV to-date to market with the 2021 Yukon Denali. “We challenged ourselves to build on more than two decades of iconic design and take it to the next level,” Matthew Noone, Director of design for GMC (and Chevrolet) told Interior Motives at the Yukon’s premiere on a vast snowy plain nestled between the mountains near Vail, Colorado. At a time when many manufacturers are struggling with slumping sales and falling profits, GMC stands as a notable exception [Ed's note: interview and launch conducted pre Covid-19 in 2019]. “We are really the strong, silent type in terms of delivering volume, transaction type, and market share,” Noone explained.

The 2021 Yukon is built on GM’s T1 truck platform, also the basis for the Chevrolet Tahoe and recently announced 2021 Cadillac Escalade. Variants of the three-row, body-on-frame SUV include the base Yukon, which grows by more than six inches in length and offers more than ten additional inches of rear legroom in the third row, as well as the long-wheelbase Yukon XL (which gains less than an inch in length) and a new AT4 model aimed at hardcore off-roaders.

The Denali variant is GMC’s luxury sub-brand and accounts for a significant portion of GMC sales. “Denali is probably one of the biggest success stories in the US, and we wanted to distinguish the new vehicle in a way customers will recognise and appreciate,” Noone revealed. Since much of the GMC design team works across all three brands (Chevrolet, GMC, and Cadillac), it was crucial to keep the Yukon Denali’s design unique and on-point.

According to Mike Simcoe, GM’s global VP of design, the Denali is "special because it’s quintessentially American".

Michael Stapleton, director of GMC interior design, added: “Denali customers are really focused on functionality. They want premium options but they don’t want Vegas – they don’t need to have everyone looking at them.”

Stapleton, who was in charge of both the Chevrolet and GMC interior studios during the project, told IM that the entire team got sketching and an internal competition yielded two final themes. “When we started out, we had one interior with slight changes to allow for differentiation between Chevy and GMC. And we heard a lot of dialogue from our customers that they wanted the Denali to be special and different. That drove some of our sketching and pushed it more from a Chevy form vocabulary to what we call a 'true Denali' vocabulary.”

In-process design rendering of the side view of driver’s side, showing the sculptural 3D wood structure housing the air vents and the use of volumes to create a premium feel

Stapleton echoed what GMC and Buick design boss Helen Emsley has told us in other interviews: In this studio, there is a spirit of all-hands-on-deck throughout the entire design process. “We really blurred the lines between the interior and the colour and trim designers,” Stapleton explained. “And Matt Noone said, ‘Hey, let’s pull some of the exterior designers and have them do some sketches as well to drive some different looks and to push what made a Denali and Denali.’ From that we got some great sketches. I would also attend all the exterior meetings and when we get this cross-pollination ‑ when we get that same look or application that can be applied on the interior and exterior – that’s when it really comes together as a holistic vehicle. We get the best answers when we engage the entire team.”

‘Denali customers are really focused on functionality. They want premium options but they don’t want Vegas ‑ they don’t need to have everyone looking at them,’ Michael Stapleton

The result is an interior that focuses on technology and utility, with a tailored look inspired by furniture design. “The GMC brand is this precisely crafted, bold statement. It lends itself to things that are more angular more rectangular or square in shape. It doesn’t want to be swoopy,” Stapleton underscored. Interior options are organised into four ‘personas’ or colour combinations. “They all feel different,” said Hannah Dunbar, GMC colour and trim designer, pointing out a jet black and brownstone trim with open-pore walnut that’s sprayed to give an ombre effect. “The highlight is these wood trims; this is a first for Denali and GMC, having so many curated interiors that give it a different mood and aesthetic.” Dunbar also notes a 26-oz “Denali loop” carpet floor mat, a Denali-specific square pin hole, “fractal” stitching, and authentic aluminium with a brushed a texture that has a secondary layer on top with a finely etched pattern. “You have details that tie the interior together, making sure there’s a continuity, so you’re getting second and third reads in the details,” she said.

While decidedly more elegant, the design also had to remain practical. “The functionality is really important to the customers and we want to play that up,” Stapleton said. “ Like the fact that we kept buttons and knobs for radio and HVAC. I don’t need to look down, I can grab the radio knob and I know it’s different size than the HVAC knob.” Stapleton also says the team was challenged to decide which elements to differentiate on the Yukon to ensure a premium feel while not spending a lot of time – and money – redesigning shared parts with Chevrolet. “We played up the premium materials and put them in the right place where people can see them and touch them,” he said. “We spent a lot of time on the shifter and the space between that and the screen and where you place your hand. We implemented the buttons, the bright work, the wood that provides a touch point for the shifter but also as a landing point. We had tried wood on the left hand side, wood on the right hand side, tried soft (material) all the way around, tried different ways to get that shifter to nestle in there just right, and now it falls into place very nicely.”

Although the Denali doesn’t get the new Escalade’s mammoth 30-inch curved OLED screen, its centre display is large enough to easily view and control vehicle functions and is thoughtfully integrated into the instrument panel. “We made a decision to embed the screen into the IP, to reinforce the use and functionality, and we think that’s a differentiator and still feels extremely premium,” Stapleton continued. In addition, there’s an optional 15-inch diagonal colour head-up display for the driver, while rear passengers get dual 12.6-inch screens with HDMI connectivity. One particular point of pride is the Denali’s power sliding centre console, which slides up to 10 inches forward and back to reveal storage space for a bag, briefcase, or other personal items. When the car is off, the console remains locked and functions as a personal safe. The patented console was developed in secret by a small team of design engineers via a think-tank-like programme at GM called co:labs. “The sliding console we’re really excited about. That’s just such a creative solution to a problem that we’ve heard about over and over again,” Stapleton noted.

As for the exterior, Noone told us the Denali’s massive front grille boasts more than 10,000 reflective surfaces. The vehicle is further differentiated by unique body-side mouldings and 22-inch Denali-specific wheels. Light blades have secondary layers of etching, echoing those found on the interior aluminium trim. “We’ve been able to deliver a much more sophisticated silhouette, and there is a lot of sculpting on the surfaces. I’m really proud that we are not sitting here today with a 7 out of 10 design,” Noone said, who also underscores that GMC’s loyal following makes it the bread-and-butter nameplate of General Motors’ portfolio.

“In design circles this stuff gets missed,” he stated. “Not a lot of people talk about truck design, but trucks are the profit centre for GM and there’s so much that goes into these. There’s a lot to be celebrated and these things are core to the culture here in the US.”

Matthew Noone at the GMC Yukon Denali reveal 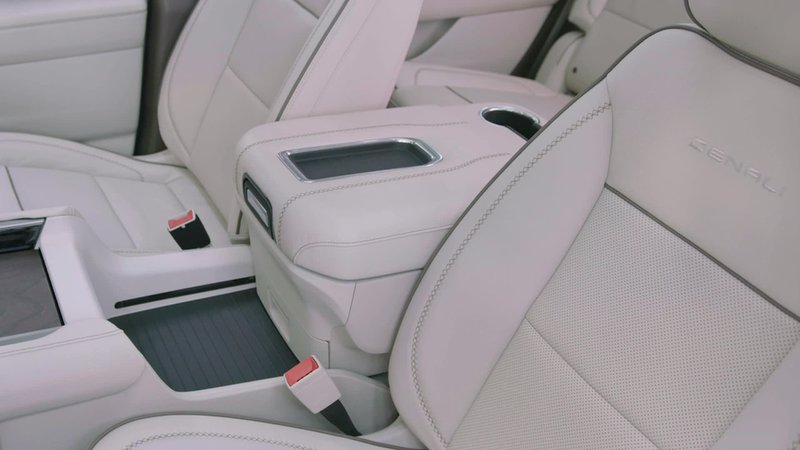