First launched at the Guangzhou auto show in November 2019, the ENO.146 electric concept was developed as a global collaboration between the GAC design studios in Guangzhou, Shanghai and Los Angeles. LA took the lead on the exterior form, Shanghai the interior and Guangzhou coordinated and came up with the build plan. The concept holds the world record for the best aerodynamics of a passenger vehicle and is able to sit up to six passengers – not a combination you can often say about any car. Fan Zhang, Head of Design, GAC R&D, told Interior Motives: “One person can drive it as a performance car, but it also operates as a family car, it is quite an amazing achievement.”

The core idea behind the concept was to demonstrate the engineering capabilities of GAC while showcasing a unique interior layout. The company also wanted to explore innovations that could be implemented in future production cars.
The ENO.146 showcases GAC’s new design language titled ‘vector energy’. Exterior and interior are contrasted in their styles, with the exterior being architectural and protective while the interior design is deliberately more fluid.

The ENO.146 has an unusual and space efficient seating arrangement, centred on family life

The 2+1+2+1 seating configuration was designed specifically cater for individual family members. This configuration is very space efficient, with the baby facing rearwards for safety, right behind the first row, and the teenager tucked into the tapered rear area. The central ‘Plaza’ zone is all about the kids. The baby seat can also be swapped out for a functional second row table. While the teenager is enjoying their own world, they also have the option to move 300mm forward and interact with the family. “It’s not just a special position for the seat but it reflects how teenagers exist in the family. They’ve half grown up and have their own world. They don’t want to be included in the whole family but equally don’t want to be disconnected,” Zhang told Interior Motives. Along with the child seat, the teen seat is a much lighter, almost yellow shade of green compared to the other seats.

The six seats, centre console and floor of the interior are formed by what GAC calls ‘intersecting wave’ elements, which aim to enhance connections between the passengers even though they are placed into different ‘experience zones’. GAC calls this philosophy ‘separately together’. At the ends of the front and rear IP structures, precision speakers are located. The large screen at the very front of the interior is easily visible for the front occupants and flows into the steering wheel support.

The interior colour and materials were inspired by the symbolic Chinese lotus flower, more specifically a famous Chinese painting of a lotus flower, Fan Zhang told us, with the brightest, inner-most area of the flower being the central kids (or 'Joy') zone which is highlighted in ‘lotus yellow’. This zone is further enhanced by a central ‘Plaza’ area in which the floor and roof light up upon request. Outside of the 'Joy' zone are the flowing floors and adult seats, finished in ‘Dark Springs’ and ‘Shaded Lake’ materials respectively. The linear theme from the exterior is also mirrored via the line work of the interior seats. “Stripes on the seats represent the leaves (the adults) and for the children they are the blossom of the family and so they carry the lighter colour,” Zhang explained.

The colour scheme for GAC ENO.146 is inspired by a lotus flower floating on a lake, with the exterior colour based on the reflection from salt-flat water

There are also ‘interactive tech’ systems that are executed in piano black and include hidden functions. The outer ring of the lotus flower is represented by the darker technical elements. “The shiny black parts on the structure and the interface for the UI/UX, they come from the water. So you have the water, the leaves, the flowers,” said Zhang. “It makes a perfect picture.”

The metal supportive parts are finished in an anodized ‘Sunset Bronze’, following on the natural design theme for this concept. All materials used inside focus on a creating a positive ecological footprint, using new processes such as 3D printing of small parts, recyclable carbon fibre and other materials, natural fibre textiles and plant dying processes.

The use of differing shades of green throughout the interior is a bold choice.  “Applying everything in green becomes a big challenge,” said Zhang. “The designers and I were unsure throughout the whole process of what it would look like, if it would work. But we kept doing it. We tried a lot of different solutions to it and the result is amazing.”

Above, the glass roof structure spans the entire length of the cabin, creating an open interior space and adding to the lightweight, linear appearance. The slatted structure is made of a filleted aluminum, allowing light to shine directly through but also providing shaded protection for occupants.

GAC’s Adigo interface is software that integrates a lot of functions such as smart driving, entertainment and controlling functions. In the future, GAC designers have imagined the car becoming a place for shopping, for entertainment and artificial intelligence.  “These are an important part of young people’s lives,” said Zhang, ‘We want to develop the idea of the car being fun.”

The Adigo system in ENO.146 incorporates GAC’s ‘separately together’ concept. Interaction between vehicle occupants can be encouraged, or the system can be individually formatted to cater for each occupant and their ‘zone’. Sound zones, temperature pockets and communication groups can be set up within the car.

The ENO.146 Concept is a showcase for technologies that GAC hopes to use in future production models. According to GAC, the same engineering methods and techniques were used during the concept’s development as are used in current production vehicles, such as wind tunnel experiments and CAD, so, most of the exterior and interior innovations have created relevant experience, which can be integrated into near-future GAC products. 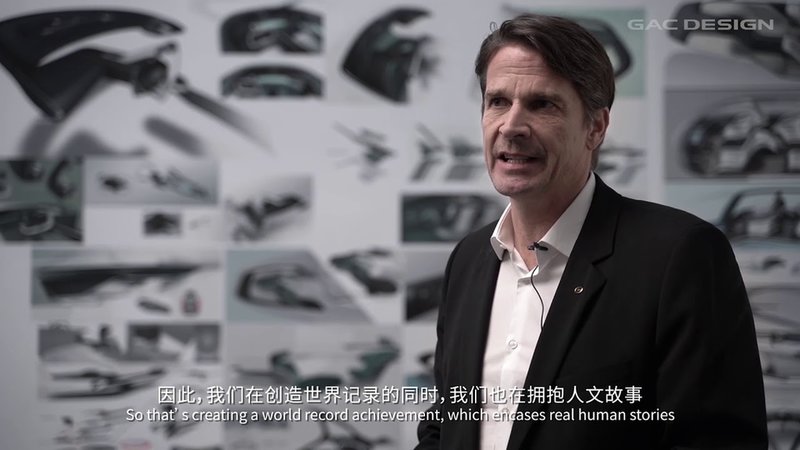