Within an exhibition that exceeded expectations, the Lexus LF-30 was still undoubtedly one of the stars of the 2019 Tokyo Motor Show.  The future electric vision pitched for the year 2030 – thus the concept’s use of letters and numbers – is a large vehicle roughly the size of a current LS luxury limousine. Its dimensions are 5095mm long, 1995mm wide and 1600mm high but due to a more compact solid-state battery powertrain notionally set between a longer 3200mm wheelbase and four electric motors mounted in-wheel rather than on one or both axles, the LF-30’s interior space has been maximised to something closer to the Lexus LM (the Toyota Alphard-based large minivan sold in China).

The start of the LF-30 project can be traced back to June 2018 and – unusually for a Lexus Tokyo concept – to the marque’s European design studio, ED2. Indeed, Ian Cartabiano, president of Toyota Europe Design, says it’s the first time the studio has been entrusted to develop a concept to unveil at the the brand’s ‘home’ Japanese biennial showcase. A big deal for the studio then and also for Cartabiano, who’s CV before joining ED2 in 2018 included a long stint at the company’s California studio CALTY and involvement in diverse designs like the current Toyota Camry production car, plus the 2012 Lexus LF-LC and 2008 Toyota A-BAT concepts among many others.

In an exclusive interview with Interior Motives, Cartabiano said the development of the LF-30 concept was unconventional from the
start. “The project brief was to make an electric vehicle that could
convey the developing brand ethos for Lexus, not only for 2030
but beyond, but there wasn’t a [specific] package or a platform at that time,” he began. “Lexus gave us a lot of leeway. They allowed us to
push pretty hard and we got to decide a lot of things, more than usual,
to be honest.”

“Compared to other projects I’ve worked on, it was more fluid, with more back and forth. Even the way started it was different,” Cartabiano continued. “We had two ‘philosophy models’, one for the interior
which basically kick-started the whole design ethos of the car and
one for the exterior that helped define some of the shape theory for the exterior. Neither of them looked like a car. The interior was more an example of the feeling we wanted to convey and the exterior a free-
form sculpture.”

During the sketch phase from August to about December 2018 – including 2D, 3D and VR modelling – the design changed quite significantly, starting out with what Cartabiano described as “classic performance-car surfacing language,” but which he considered too “normal” and then on to a shooting brake form, subsequently discounted for its packaging downsides.

“From the very beginning, we knew the front portion of the car
based on the interior ‘philosophy model’ would be sleek and driver-focused,” he recalled.

“The rear passenger section had to have space for two rear passengers plus ‘adequate luggage’ – what you’d need for a five-to-six-hour trip. The interior came first and definitely dictated the exterior.”

Case in point, as the design developed and physical models were made Cartabiano found that the outside shape was detrimental to interior room. “When we sat in it, we realised the exterior was too sleek. So we redid the interior and that affected the centre line of the car and changed the vehicle it became. We discovered that the rear portion of the shooting brake wasn’t buying us any additional useful luggage space and was also contrary to the aerodynamic centre line you need for an EV. That’s when we moved to a fastback profile.” It was at this point that the team also came up with the idea of ‘airporter’ drones. These were not working on the final concept but are shown on Lexus’s LF-30 YouTube video [see video at the end].

The drones are integrated into an LS-sized boot and exit through the LF-30's concept's rear diffuser to  move luggage from the car to a final location.

Although the final cabin space created is large – and genuinely spacious when we sat in it – there is still a cocooning feeling for all passengers, plus a clearly differentiated driver space with a wraparound cockpit designed to make the person at the helm feel connected to the machine.

Cartabiano says the package allowed for two weekend bags to be stowed in a front trunk area too but was keen to avoid any ‘lounge on wheels’ associations overall.

“I think an easy answer for a lot of autonomous or EV vehicles nowadays is to do a loft or hipster apartment on wheels, where there’s just endless amounts of space and the driver’s seat rotates to face the rear, but then there’s no sense of driving, just relaxation. We wanted more space than a typical car but it still had to feel like you were inside a performance vehicle. That was the careful balancing act.”

According to Cartabiano, the LF-30’s cabin design was pretty much the work of one individual, Karl Dujardin, an ex-Christian Dior jewellery bottle designer hired by ED2 a few years ago. This influence is evident in some of the detailing, especially the four portable cylindrical controllers, which Lexus calls ‘Phygital’ because they act as a physical bridge to the digital control of the vehicle.

Whether you like the hybrid name or not, the idea of these controllers to retain a human touch is interesting. “We have gesture control and augmented reality but thought there would be joy in still being able to control advanced technology through physical movement too,” Cartabiano reasoned. “So we made a key that doubled as jewellery. Each car comes with four keys with all the information you wish to share, connecting you to the vehicle’s UX system and acting as your lifeline to it. The centre is made of glass because ED2 is in the village of Biot, famous for its glassware, and we wanted to bring a little local artisanal custom to this high-tech show car. Within the glass is the black captured carbon output from producing the car and within that a streak of gold. It’s part of the Japanese tradition of Kintsugi, where if a bowl breaks, you put it back together with gold in the cracks, so the object becomes more beautiful when it’s damaged.”

This mixture of high-tech and human is continued with the use of recycled metal fabric on the interior shoulders of the concept’s doors – “those pleats were hand-laid by a local craftsmen and he had to do it a couple of times, so I’m sure he wasn’t loving us by the end of the project,” Cartabiano recalls with chuckle – but also in the front seats’ ribbon back structure. The latter quietly references the dramatically ribboned-structure seats of the 2016 Lexus UX concept (also designed at ED2 before Cartabiano’s tenure) and both nod to the Takumi craftsmanship story from the LS and expand it.

“We wanted to use that ribbon imagery to visually lighten the seat,” he added, “while putting the strength on the outside where your touch points are.”

In conclusion, while those familiar with Lexus’s (many) concepts in the last decade will notice some similar interior themes investigated, I suspect few would dispute that the LF-30 is one of the strongest.

Guided by three design keywords “brave, artistic and futuristic,” Cartabiano and his team have created something which, if it really can inform the design of a 2030-spec Lexus flagship car, will be remembered as a very significant concept. 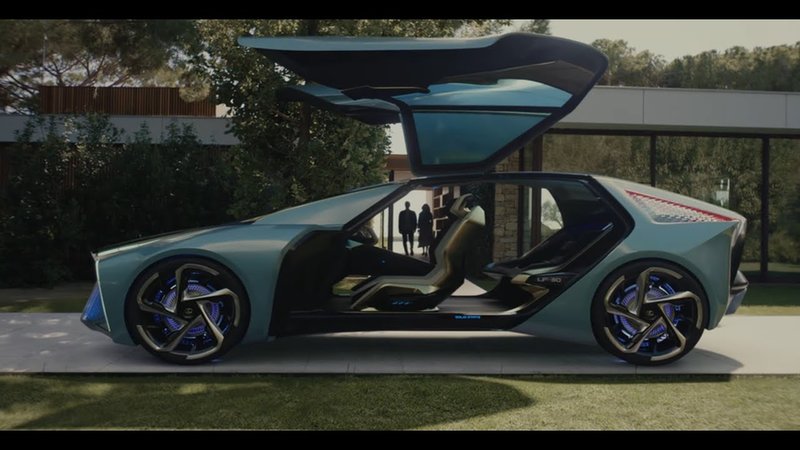