From hum-drum beginnings as a ‘compliance vehicle’ solely created to satisfy eco legislation, the Mustang Mach-E has emerged as one of the most smartly designed electric vehicles of the new decade. According to Joel Piaskowski, Ford’s global head of design for cars and crossovers, the car originated as an electric version of an existing mid-sized SUV with an exterior design sketched as far back as 2014. With a ‘carry-over’ cabin planned, interior designer Josh Greiner concedes that the original brief “wasn’t super-inspirational.”

Talking exclusively to Interior Motives, Piaskowski and Greiner explain that a key moment was summer 2017 when senior management decided to make the SUV EV “Mustang-inspired”, even though the Mustang name was not confirmed until much later. A separate crack squad was set up – dubbed Team Edison – headed up by Ted Cannis, who recalls: “We realised we had to do something special to break through in what was a more crowded battery-electric vehicle market. We had to play to our strengths, lean into our icons and leverage new tech.”

The first sketches were done in 2014, long before the Mach-E was to be “Mustang-inspired”

Piaskowski picks up the design development story. “Then there was a global competition, so we could turn the page to something new,” he begins. “Part of the remit was to make the vehicle more spacious. Not only physical space, but also more space for what customers bring to
the vehicle.”

Of course the danger of going minimal is that the whole ensemble can feel underwhelming, something interior designer Greiner was acutely aware of. “One early sketch got us thinking about this ‘sound bar’ idea on the instrumental panel and wrapping that in material, to bring warmth to perhaps an otherwise more sterile environment,” he explains. “We were already engaged with Bang & Olufsen when this extremely modern approach to the speaker system came about. The sound bar idea also helped us highlight the ‘double-brow’ detail which harks back to the ’64-and-a-half’ Mustang. With the ’05 Mustang that dual binnacle came back and it has been continuous ever since.”

But isn’t a sporty Mustang all about cocooning the driver and more detailed muscular forms? Given the strong emotions that surround that beloved Ford icon, there must have been some serious chats with marketing beyond making the Mach-E fast (Ford is targeting 0-62mph in sub-five seconds). “Very much so,” Piaskowski says, “but the more we pared down the interior and made it simple the less it distracted. You don’t look at styling lines but concentrate on the driving experience.”

With a transmission tunnel unnecessary for a dedicated EV chassis, considerable time was also spent deciding how to utilise that extra space. “We did a lot of research with customers on early prototype interior bucks and asked them different questions,” Piaskowski continues. “Women always say they want a place to put their purse, so we decided to offer a big open compartment at the base of the instrument panel and create little walls around it. But when we spoke to those customers they said, ‘I don’t like it there, because it’s too low and not accessible to me and I’m worried it may flip over into the driver footwell and cause an accident, plus I don’t want to ruin my handbag.’ So we had another look.”

Customer clinics are not normally most designers’ favourite part of the design process, but Piaskowski is quick to say that there wasn’t more clinic-ing than normal on the Mach-E project, so much as different methods. “It was more interactive and happened more frequently over a shorter period of time,” he explains. “We had a full-size buck, real simple, made out of white foam, using early math data to represent our IP, door panels and centre console and took a fresh approach with customers. We had a USB port sticker and asked them where they wanted to place it.”

Piaskowski confirms that of the themes presented the final production design was one of the less overt ones, but also says that this pared-back approach meant the team could devote more time to fit and finish. “It allowed us to pay more attention to craftsmanship and how things are bolted together,” he explains. “For instance, raising the door speaker to just in front of the door-pull allowed for more storage in the lower door pocket and raised the prominence of that speaker as it’s wrapped in the same material as the sound bar.”

Piaskowski makes mention of further examples that a customer probably wouldn’t notice at first glance but could come to appreciate during ownership. “The chrome section around the sound bar pivots slightly towards the passenger to catch the light and it’s also available with a real copper coating. And for a long while the engineers didn’t think they would be able to make the floating armrest without big bulky hinges – that would look horrible – but we fought and fought and spent 1,000 hours on it. Our engineers came up with an amazing solution assembled from the inside out, rather than from the outside in, so the mechanism can be smaller.”

A more obvious differentiator – compared to existing Ford interiors – is the size of the Mach-E’s screen. Even after the summer 2017 change of tack Piaskowski says the interior had smaller screens: “We had a 10- and then 12.3-inch landscape-oriented screen but Team Edison did a lot research in China and came back with this revelation that we had to have a much larger version. That’s when we went to a 15.6-inch portrait screen.” Surely a glance at Tesla’s massive screens would have told them as much? “Even though our competitors do something, it doesn’t mean we should do it too,” Piaskowski responds firmly, “it’s about learning what’s right for our customers.”

At this point Greiner chimes in too: “The portrait shape allows people to see further ahead to where they are going, not just where they are. It’s how you interface with your phone every day, so those things matter.” Even the screen’s back shell is bespoke, made of lightweight magnesium and wraps around the screen to create the slimmest of frames. Crucially, Ford paid attention to what goes on within the screen too. The Mach-E showcases Ford’s next-gen Sync software, which will be the first cloud-connected Ford infotainment system to create more up-to-date mapping. Meanwhile the system’s AI will make suggestions based on users’ routines and can display multiple apps simultaneously, at different sizes according to user priority. A Range Rover-esque physical rotary dial is embedded neatly at the bottom of the huge screen for easy volume adjustment, Apple Car Play and Android Auto will wirelessly connect and a more natural speech voice control system is promised.

The washable and drainable ‘frunk’

With this new large screen infotainment system, plus functional and ethical ideas like the washable and drainable ‘frunk’ replete with cupholders and an animal-friendly Dinamica-clad cabin, the Mach-E appears way more innovative than many recent Fords. No doubt the larger and more intuitive screen and software will filter down to lower-priced models to amortise high initial development costs – despite the Mach-E’s relatively democratic mid-sized electric SUV pricing of £40,000-£58,000 before local grants – but it will be interesting to see if its minimalist aesthetic will spread across Ford’s range in similar fashion. Either way, this is one of the best volume-production interiors we’ve seen from Ford in a long, long time. 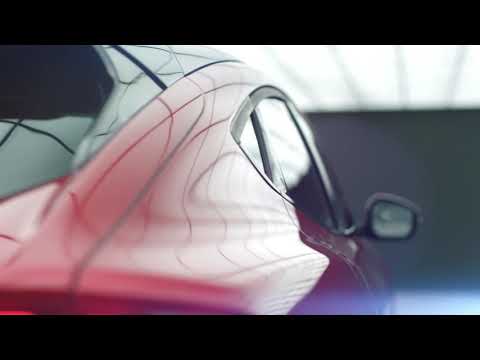