Like so many of 2020’s best concepts Interior Motives still hasn’t had the privilege of seeing the Geneva Motor Show-bound Polestar Precept up close due to the restrictions in place to curb the ongoing Coronavirus pandemic. Consequently, our analysis only comes courtesy of a raft of design sketches and final photos to peruse, plus a long chat over a slightly crackly phone line between London and a remote part of Sweden where Polestar head of design Maximilian Missoni is currently holed-up.

There are many things to clarify. Firstly, to put the concept into size perspective. Polestar is not quite ready to reveal exact dimensions but Missoni says the size of the Precept is somewhere between a Tesla Model S (4979mm) and a Porsche Panamera LWB (5199mm), all of which suggests it is probably longer than a regular Panamera (5049mm). Polestar is also happy to admit that the Precept has a 3.1-metre wheelbase able to house a large battery pack between the two axles and also create significant interior cabin space too. More than all that, the Precept is also a flagship for what Polestar should become design-wise – “a pinnacle type vehicle” for the brand, in Missoni’s words.

Key to that interior package and our focus for this magazine is a crucial element of the exterior design, or rather the absence of one detail: a rear window. Instead, Missoni’s team has a wide-angle camera relaying images back to a rear-view mirror display which allows the full-length, one-piece glass panoramic roof to extend behind the rear seats and the hinges for the tailgate to be placed higher to provide a large overall boot opening. Rear legroom and headroom is thus enhanced – if CEO Thomas Ingenlath’s not inconsiderable height and frame sat in the back during the official Polestar video is anything to go by – while keeping a low exterior roof profile. Missoni says the Precept is a car that can be driven by the owner or used as a chauffeur-driven vehicle, so rear room and appointments are important.

The design process for such a key flagship was fairly rapid though. Missoni says about six months-quick in fact, starting in September 2019. The interior team was lead by Conny Blommé and key sketches were done by interior designers Benjamin Pérot (IP), Zehao Liu (seats) and Axel Ernstsson (details). Missoni says that given the short timeframe few alternative designs were considered and the compact interior team was very focused. “We still feel like a small start-up company, albeit based within a bigger group” Missoni continues, “so we needed to make a strong statement which would make customers want to invest money into Polestar rather than a legacy brand.”

Despite the close-knit concept team, Missoni concedes that currently his designers are drawn from the entire Volvo design group, although his responsibility is for Polestar alone. The Precept’s interior design itself is clean and simple in terms of form, with an instrument panel (IP) that mainly exists to house the air venting which feeds air to the cabin via a long horizontal slit between the upper and lower sections.

A large portrait-oriented 15-inch centre touchscreen sits in front of this IP as does a 12.5-inch driver display behind the steering wheel. Missoni says considerable time was spent improving the centre touchscreen over existing Volvo Group software and hardware.

The Precept is the first to promote the next-gen Google Maps and Android operating system and the screen has proximity sensors for users’ hands which then reveal large virtual buttons more easily touchable on the move. Move the hand away, and the buttons hide once more to keep the screen look minimal. Elsewhere, at the centre-top of the IP eye-tracking tech allows the car to monitor the driver’s gaze and adjust what it displays in the various screens accordingly.

The interior design approach all round is minimalist in both package and colour and trim but a feature has been made out of a seemingly mysterious but sizeable glossy black box on the centre of the parcel shelf between the rear seats. Inside is a holographic representation of the Polestar logo which appears to float and rotate inside the crystal, while the crystal itself is labelled with details of the actual Pole Star (its rotational axis and declination), that gave the inspiration for the brand’s name. It’s a small flourish in an otherwise restrained space.

One of the biggest stories within the Precept’s interior is the use of new and experimental colour and materials. Sustainability is a key factor in the material choices, from the carpets made of reclaimed fishing nets to the seat bolsters and headrests covered in vinyl made of cork wood.

The recycled nature of these materials are somewhat hidden – they look like regular carpet and vinyl – but the content of the interior panels and seatback upholstery is more explicit. Take the darker and checkered upper and lower areas of the interior door cards and parcel shelf for instance, which use the gridded nature of Swiss supplier Bcomp’s flax-based composite powerRibs structure on top of its ampliTex material as a visible design feature. Able to cut weight by up to 50% and reduce plastic by up to 70%, Bcomp’s materials are already used in the boat industry instead of carbon fibre due to similar lightness and strength, but with much more sustainable origins. As Missoni enthuses: “We even back-lit the surface to show this beautiful fashion-like, irregular texture so different to carbon fibre, which is precise, repetitive and symmetrical.”

On the seatbacks 100% recycled fibre made out of used PET bottles is 3D-knitted to the exact shape required to avoid off-cuts – an eco fabric and technique long used to make uppers for modern sneakers – and alongside the recycled cork vinyl and aluminium accents the combination creates a highly premium cabin impression.

All in all, the Precept is a very ‘smart’ concept design in all meanings of that word and bodes well for the Polestar 3 which it prefaces. The latter vehicle is already known to be a large SUV, but many of the ideas on the Precept are likely to feature within its design. So why not make a concept Polestar SUV instead? “Because we didn’t want to give away too much of the Polestar SUV’s shape as it has a strong character,” Missoni reasons, “and this car is a very interesting style to look at.” Could the Polestar 3 be something like a Range Rover Velar? Missoni audibly chuckles at the question but answers with deadly seriousness: “The Polestar 3 is a large premium aerodynamic SUV. Clearly the SUV segment is the dominant one now and will continue to dominate for a while, but we also acknowledge that SUVs are not always the most responsible means of transportation. So we really are trying to find a sweet spot which is a) beneficial to the Polestar range and b) is a more responsible expression of an SUV …and that also looks great. But what’s most important to say is that the Precept shows that Polestar has its own design and product portfolio ahead of it in the future. It’s an emancipation from Volvo.” 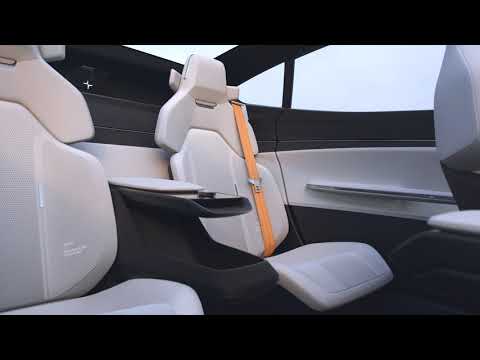