Shape-shifting concepts have been seen before – the 2009 Rinspeed
i-Change and 1992 Matra Zoom are two that spring to mind – but Renault’s Morphoz puts a definite 2020 twist on the idea. Why? Because in an era of fully-electrified powertrains often hampered by limited range due to the number of batteries they can carry, the ability to accommodate more batteries by lengthening the car itself is an interesting proposition. On this concept that transition means changing from ‘City’ guise – a 4.4-metre compact SUV a little smaller than a Renault Kadjar – to ‘Travel’ mode, a 4.8-metre long vehicle more akin to a Renault Espace.

The way the Morphoz does so is ingenious and involves three separate movements. The front axle and fenders slide forward 20cm; the front face protrudes outwards by 5cm and the tail section morphs rearward by 15cm. The proportional effect is akin to a squat compact SUV gaining a little more nose and tail while the wheelbase extends from 2.73m to 2.93m to accommodate a bigger battery for longer electric vehicle journeys (installed from below). The 1.55m high roofline is unaffected, as is the two-metre width, and in both modes the proportions work well.

This wonderfully-executed and fully-working ‘morphing’ exterior – thus the Morphoz name – has the effect of extending the second-row interior space, rather than making the boot significantly bigger. In so doing it creates room for the cabin’s elements to morph a little too. The one-year project started in March 2019 and sketches were chosen by May 2019. Damien Durand’s key interior sketch won the internal design team competition and Maximilian Kandler worked with him on the concept’s interior details. Kandler says 95% of the interior design work was digital and via VR by VRED, with physical proportional models only made for
the exterior.

The concept’s cabin space is accessed via huge suicide doors and  features four domestic interior-inspired, retro-tinged, one-piece shell seats that hang off a central tunnel so they appear to float. They’re upholstered in a fantastic bright yellow wool, mohair and elastane fabric made by Norwegian supplier Gu, which, explains colour and trim designer, Fanny Serouart, is the material also used for the seat upholstery on reissues by French furniture designer Pierre Paulin known for 1960s classics like the Orange Slice and Tongue chairs.

Interior sketch of the cabin by Damien Durand

The design and mechanics of the Morphoz concept’s seats are far from retro though. Symmetrical from its ‘corner’, the front passenger seat can pivot on its axis, front to back, to allow the front passenger to face the rear ones for more convivial conversation and interaction. With this vertical sliding movement the seat back becomes the seat base and the seat base extension doubles up as a head rest.

It’s a novel way of avoiding the usual horizontally rotating captain’s chair type approach and could save space in the cabin’s width too. Meanwhile, when the concept extends in length, the rear seats move backward to create more legroom. Envisioned as a Level 3 autonomous vehicle the driver’s seat stays fixed and facing forwards.

These are fairly logical and obvious interior morphs, but there are other less obvious ones within the Morphoz too. Beyond the 10.2-inch screen at the centre of the steering wheel where driving and safety information is displayed, to its right is an asymmetric L-shaped digital display which folds out, or back into the IP when not required. “At home I don’t want to see my TV the whole time,” Kandler explains with a smile, “and with this folding display I can reduce the information in my car too.”

Then there’s the central tunnel that runs between the seats which is full of function, and surprise and delight. Towards the back of this tunnel is a horizontal screen where rear-seat passengers can swipe through music options, but graphically rendered in a delightfully analogue way as the 7-inch record sleeves or CD covers, depending on your age and inclination.

Even better, at the front, users can place their smart phone on the back-lit area of a rubber-backed section of the tunnel’s smoked wood matt-finish veneer which then deforms to allow the phone to sink into a small depression and welcome the user to the car [see image in gallery above]. Called Airwood and made by Arca, when you’re ready to leave again, lifting the phone off allows the tunnel’s shape to move gently back up to become a single smooth surface again (and disconnects the phone from the car in the process).

It’s a fantastic effect, both actually and symbolically and needs to be watched on video – or seen in person – to fully appreciate.

At the very front of the tunnel is another hidden detail, a diamond-shaped, black and white-striped hole, representing Renault’s logo by its absence. It’s one of many references to optical art on this car and is fitting because the company has had connections with that art movement through its history, including working directly with op art pioneer Victor Vasarely.

The colour and trim in the Morphoz displays sustainable variety and function in depth too. The also op-art inspired deep-ribbed, black and white-veined marbled flooring is actually a material called Nova made out of recycled plastic yoghurt pots by Plasticiet, based in Holland. The seat shell covering is Microfibre by Kvadrat, which uses 70% less water in its production than before and the matt finish smoked-oak wood used for the IP and door cards has a water-based varnish to limit the amount of harmful chemicals involved. As Serouart explains: “We worked with Keim on this [the company that also developed the wood-frame bicycle shown with the 2016 Renault Trezor concept]. The IP and door panels also have a parametric hexagonal pattern made with Grasshopper 3D design software to allow light from behind to show through. It’s subtle.”

All in all, the Morphoz bristles with innovation and design detail. Yes, the extendable car mechanism is no next-gen production car teaser tech, but as Renault’s head of concept cars, Leboine reasons “we’ve had moving parts on aeroplanes around the wings for years, so the idea is feasible, it’s just about cost and manufacturing questions.”

The Morphoz is a very French concept car in that it’s got a true philosophy behind it. All of its designers, whether French or not, seemed to have thought a little deeper. It’s about the car being within the environment, not imposing itself upon it and what the shape-shifting qualities of the concept could enable. “The ability for the car to adapt to everyday life and its environment was key,” says Leboine. “So we made something that is transformable, almost ‘animal’, to adapt to different lives. It was also to talk about the big picture. We all belong to an eco system like in nature, so the car should be part of it. And in the future, if people share these cars, two families could afford a car they couldn’t have before.” 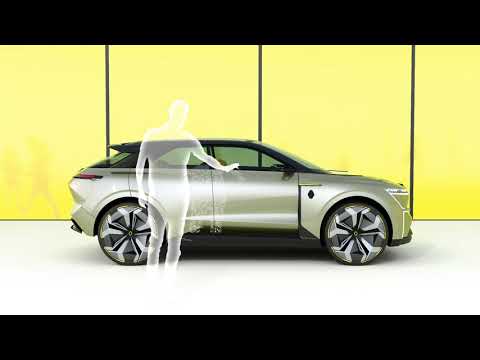